After being in A&E out of hours twice in the last few weeks, I’ve had to miss out on a lot of riding, but things are slowly on the up!

On the Sunday of the Hales Superbole Round 1 ATBA UK series, I managed to fall slowly and awkwardly onto my right knee, whilst trying Horseboarding. It swelled up and the following week it went purple, enough to make it difficult to walk and really worry about competing the rest of this season. 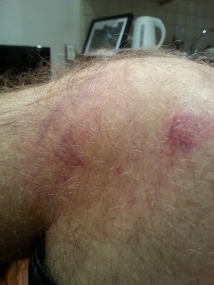 Luckily an X-Ray confirmed nothing was broken. After a tough 2 weeks of not getting on a board, I was just about able to ride for ATBA UK Round 2 Downhill, in Perth, Scotland! Also my 21st Birthday Weekend. :]

Perth was my favourite Downhill I’ve ever entered, even with my brake on. A lot more riders turned up than expected, which is always good! Here’s a Raw run of mine:

I placed 7th of 10 in the Seniors, which I didn’t think was too bad considering I was taking it easy, trying not to hurt my still recovering knee. Already I’m ahead of where I was last year after 2 Downhill rounds, but I still have a lot of improvements to make if I ever want a podium..

Everyone was really going for it at this Downhill, the top 3 Seniors seperated by less than 2 seconds and Beiran beating Brindy by 100th of a second in the Pro’s to take 1st! Here’s my edit, just a glimpse of the Gnarly shit that went down:

Unfortunately I had to make the decision to not enter Another World ATBA UK Round 3, as the risk of a crash whilst boardercross racing is a lot higher. Also on the 4th-6th July I’ll be Freeriding with some NoSno mates at the legendary downhill spot, Whinlatter in Cumbria, which I’ve been looking forward to all year, no chance was I gonna miss it! (Get the fuck on it: http://www.surfingdirt.com/forum/showthread.php?p=90955#post90955).

To take my mind off missing Another World Round 3, I attended Go Skate Day with Nottingham Longboarders! This turned out to be a fantastic decision, such a fun day of meeting lovely new people (over 30+ Longboarders in attendance!), pushing distance, dancing, downhill and of course, sliding. Photo by Alex Bailey (definitely one of the raddest female Longboarders in the UK):

Still need to work on relaxing my standie stance and pushing my front foot a bit more, for extra sketch.. but they’re getting there!

Here’s another mini edit of the day, personally love the behind follow cam shots I got, from putting a sticky GoPro Mount on the back drop of my Five Mile Widowmaker deck! Shredder of the day, had to be Johhny PB, a 15 year old Grom that rides for Surf Rodz Trucks, who does fast, long toeside standies in his bloody sleep!

After this event I was the definition of tired.. getting home, trying to eat dinner and falling asleep on the sofa, after a few mouthfuls.. totally worth it. Fuck yeah, Longboarding.

On a final note, I know this is a big update, recently I’ve really been thinking hard about what I enjoy most. Mountainboarding as a whole will always be in my heart as my first board sport love, it’s easy to learn and in my opinion it was the friendliest community in the world. But over the past year, I just adore going fast and sideways, hence my growing passion for Downhill Skateboarding. In years to come I have a feeling it’ll become my main sport, mainly because I spend more time on a Longboard than anything else, where as Mountainboarding is much more of an occasion. Progession has been far quicker Longboarding, mainly down to riding with a local (Ry Swanton) who won’t admit it, but I’d say he’s in the top 20 in the UK when it comes to Downhill/Sliding. Not to mention the amount of Freerides/Outlaw events I attend. Don’t get me wrong though, I still love Mountainboarding, I just don’t feel I’ve progressed in the last 6 months or so.

Sounds mega dull, but the safety factor also comes into it, if you crash Mountainboarding, generally you’re getting taken for a ride and have far less control. On the other hand, Longboarding I’m always wearing slide gloves, knee pads, elbow pads and helmet, meaning bails are so much safer and less likely to cause injury.

Far too much going on, ah well… back soon!