With Winter coming (not a GoT reference) and all Official UK Mountainboard & Longboard events all finished, I’m now looking to next year. Mainly thinking about what I want to concentrate on and where my timing system could be used.

Just over a week ago, Hogtober Longboard Fest 2014 went down (11th-12th Oct). It was an awesome weekend, I drive long distance for the first time, down with Georgia (fellow CLC’er) and Tom from Hereford. Not the nicest 3 and a half hour drive, but worth it. The Saturday was just a freeride day and also the slide jam. Georgia got some various footage for her Uni Project film, where as I was mainly focused on practicing for Sunday’s racing and my timing system demo. The weather was also on our side with only the smallest of drizzles early afternoon that didn’t affect the grip levels. By the end of the day I was happy with taking a tight line into the chicane at 29mph, but confident I could still improve. My setup worked like a dream and I was glad I’d got some DH practice in a few weeks previous. The Otang Kegels (80mm 80a or 83a) seemed to be the wheel of choice for most riders and I was no exception, incredible roll speed + Cast 42.5 deg Ronins = Win. 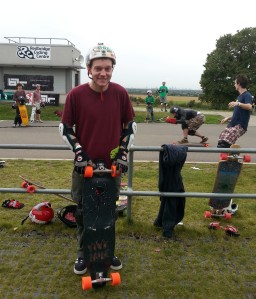 As for the timing system demo, it worked, but only 3 people seemed to show an interest. But those 3 organise events, so that’s the main thing. After a little panic when the start gate wasn’t working, it just turned out I has plugged the grounding cable in wrong.. I may need to make myself some instructions.. aha. For now it’s a case of drumming up more interest before next year’s events. Using my system as a qualify to race system in 2015 Longboard events would be a dream come true! People complimented how simple but effective my system is and I can’t wait to see where it goes now!

Literally half the slide jam riders were on Bodhi Keen’s new slide wheels, Slide Perfect’s and I also bought a set. These wheels defy physics.. go get a set, they’re £25, enough said! http://www.slideperfect.co.uk

Camping Saturday night is always good fun with Longboarders and this year was no exception. Also a lot easier being able to sleep in the car after a beer or 4.

Sunday came around and we made for the track nice and early, I was so damn excited for racing, knowing I’d do better than last year (last in every heat). As it turned out, my first heat, was my first ever win. I had a slightly slower push start but once I got going I took a straight line through the chicane at 30mph and managed to get 2 air drafts in a row to go from 4th to 1st on the back straight, I was surprised but what a rush! My second heat was a lot more chaotic, after the start I was second going into the main straight, but got bumped and was far too close to the goofy rider infront for the chicane, an inevitable crash happened despite my attempts to airbrake and take a different line. But as I pre-empted the collision, I was quick to get back up and pushed fast to the line to take the win.

I went to aplogise to the rider infront (Sam) afterwards who had a lot of road rash, but that’s racing and I learnt from it. 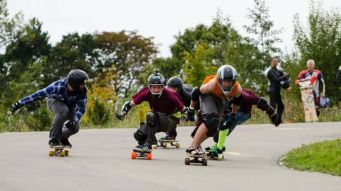 My last heat was more tricky with 2 other sponsored riders in it, I knew the best I could hope for was third. Sure enough I was 4th after the start, I had to stop pushing to avoid a collision but I doubt it would’ve affected the race outcome. Through the chicane I was right on 3rd place’s tail and close enough to air draft again, I took the inside line on the final corner quite aggressively but it got me third and a place in the semi finals (Top 12 of 55 odd riders)!

It was a great experience to be in the semi finals but even after trying my hardest I wasn’t that close to the pack and came last, but wasn’t at all disheartened! A great experience that’s going to be hard to top in years to come.

Joe Baldwin (who else) took the win in the Open, with a closer than usual race, having to draft overtake from 2nd on the last corner. Stunning to watch and how some riders tuck turn the chicane I’ll never know, LEAN HARDER!

An awesome weekend enjoyed by all but a bit sad knowing there’s no more UKDH events until 2015 now. Here’s my mini edit with what little GoPro footage I got.

Going forward now, I know 90% of what I want next year and I’ve made a lot of new friends recently through Longboarding locally and abroad. Sadly Mountainboarding is probably only going to be freeriding next year as I enjoy that more, also the World Boardercross in Serbia might not be happening from what I’ve heard. Now is the time to get a set of 10’s and get back on the brakeboard runs though! Some exciting changes are going on with Kite Mechanics at the moment and hopefully I’ll be able to announce them come January 2015!

Until next time. Cheers!