The last month or so has been very quiet event wise, but some important things are happening for myself, Kite Mechanics and DG Race Timing.

Since Hogtober, the weather is back to typical UKDH wetness and roads never drying, but rain skating can be fun too! Last year around this time was when I was learning my first slide (Coleman) and I feel I’ve learnt so much since then.I’ve also changed my Rayne Vandal setup to have Sabre 45 degree baseplates, to be a bit more stable and grippy.

The wet this year is the perfect opportunity for me to learn and perfect Toeside Predrifts. So far I’ve only done 3 solo sessions of purely practicing them and it’s a lot of fun!

All being well, I can get to the stage where I’m confident with them, going fast in the dry before Winter’s end. Also, I’m off to Exeter next weekend to skate some longer faster roads, so that should be a good test and a nice change of scenery!

On the Mountainboarding side of things (a little on the sidelines recently), Billy @ Kite Mechanics has been showing me some awesome new inventions. He’s aiming to break into yet another sub market of Mountainboarding parts before year’s end and I should be testing the new bits very soon and able to give some more specifics, but at the moment, it’s still first prototypes. In essence, they will revolutionise ANY NoSno downhill setup and be cheaper, compared to buying New NoSno parts. I think some people will probably be able to guess from that..!

Winter is truely here now and the whole of Team DAD, including myself are on 10 inch tyres and brakes. Clayton kindly gave me his spare set of 10’s and we fitted them one evening a few weeks back, making the floor muddy as… totally worth it though. 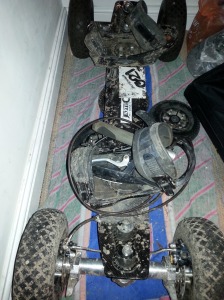 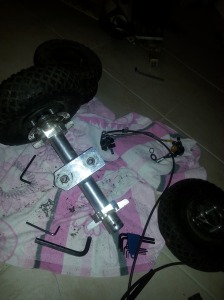 So far I’ve had 1 ride with 10’s front, 9’s back up Leckhampton, that was gnarly as fuck to say the least.. but also Mill Lane up Cleeve Hill on all 10’s. Mill lane felt great and all 10’s really came into their own, bashing rocks out the way and giving me a LOT of grip in incredibly slippy woodland, then unreal top end speed on the road section, hitting 30mph with ease, with the brake slightly on. A fun night, but I could of tested it even faster, if my fuckin’ torch worked as it should.. ah well, next time.

More updates on this to come hopefully next week, if not after I return from skating Exeter! Until then, cheers!